Crittersong and the smell of microwaved leftover pizza filled a comfortable living room.
A slow start of a lazy afternoon.

"Bat and Bear" is a queer visual novel about mental health and healthy relationships.

Being an hour and 30 minute long VN, it's a story about healing and coping, and I hope you all enjoy it!

Let's-plays and comments are welcomed!

This visual novel is not intended for those under 13 years of age as it contains strong language and potentially triggering content.

This is such a sweet story! I really enjoy the life that the animated lines give to the sprites and the limited use of color is also very effective! You also handle the dark aspects of the story with nuance and authenticity, and I'm grateful you balance them by including caring and healing scenes. <3

hi ! I'm sorry but I can't seem to download it. I tried on 2 pcs I get "cannot read property build of undefined"

ah! i'm sorry! i'm looking into what could possibly cause the problem.
did you try downloading the game on the itch client or via the browser (like through chrome)?

It's all good now, my attempts were on the launcher. It works now with the browser, thx !

ah! no problem! i hope you enjoy playing bat and bear!

Amazing game, I should be able to knock all the teeth out of travs face tho thats the only issue

I know bear punched him but still, I want him to go through with the juul threat

i might consider making a trav basher spin off game if i get into clickteam fusion! ghfjkfhgjdfkhjf

Alright, i play the game, and IT'S AWESOME, i make a account just for comment this! You gonna be to add some more????

I real feel so emotions when I play this game, and even though it gave me some triggers and make me almost crying for it, i enjoy every moment and enjoy all dialogues that this game has

And sorry my bad english, it's not my native language, I'm brazilian, so is hard write lol

it's all good! i'm glad you enjoyed bat and bear!! i don't think i'd be adding to it though, might patch up the dialogue so it may flow better at most. but if people are interested in one, i might make a prequel game/comic to bat and bear where they're in college!

I haven't been able to download it and I was wondering if bat and bear is available on things like Amazon kindles?

sadly no, i'm not even sure if renpy has the capability to make something for kindles. but i am trying to get an html5 version out, so hopefully you could play!

Very sweet. Very sincere. Sure, the writing and pacing may not be perfect but the emotion is real. I felt that encounter.

Also, in the words of Mae from NitW, Trav can choke to death from eating my entire ass.

The story has a few major issues.
(Found through TikTok, I was excited to read since it looked like a really interesting narrative. Relatively dissapointed.)

To avoid spoilers, I'm going to talk about mainly the first ten minutes of the game. The pacing is really REALLY fast, within three or four minutes you're already being introduced to a character who pretty clearly has significance to bat. They're introduced very clumsily and a lot of their dialogue comes off as unbelievable.

Lots of the dialogue in general shares the issue stated above. This game is a click fest, there are very commonly segments where you must click through 3-5 lines of empty text, like literal periods. There's a MASSIVE textbox, yet it is seldom used to its full potential. Outside of that, there's so much random back and fourth banter between the characters that just comes off as awkward. It's fast... weird text that just feels unnatural. This game almost feels like it's often patting itself on the back with references. Just in the first five minutes or so the entire game has a very forced adventure time/night in the woods vibe, which WOULD be okay if it weren't for the fact that it's VERY obvious, and VERY poorly implemented.

The writing as a whole is kinda meh. Interactions feel weird, not a lot is said, most dialogue is only 5-10 words long. A lot of the time it feels like the game is being written to use as many funny buzzwords as possible. "Burgs" and "Borgiers" comes off a lot more endearing when real people are saying it with their real voices, and a lot less so when written out. Lines come across as cringey.

While I do have my issues, this game does have some pros. It's relatively short but has a somewhat compelling narrative, as well as telling a good story in the short time frame given. It's definitely a "life window" sort of visual novel. You kinda just pop in for a little while and watch the characters do whatever, and then leave. The art is really really nice, I actually really enjoy the style.

The VN could be really great, the major ideas and heart are in it, it just needs work in writing. Focus less on making your characters feel loveable and relatable, focus more on making them feel real. Dialogue should be a little longer.

noted! i'm aware that the pacing and writing isn't perfect, so when i have the energy and time to do another patch, i might go through and do another pass to fix some pacing issues :0

I'm going to respectfully disagree with the above analysis, except on some of the pacing notes, but the dialogue felt very believable and effective.

As an intersex person, I've been though many of the same things as my trans friends, and I absolutely knew a guy like this in high school. The way the dialogue played out vibed very real to me, and that kind of scene is something I've seen my trans friends go through too.

People who have these...prejudices...often speak in what could be described as "word vomit".

absolutely loved this VN and can't wait to see more work from you. a little suggestion would be to possibly add more of a conversation about bear being insecure about his size or something along those lines. i'm not sure if he as a character is self conscious, but it could give some representation that normally plus-sized folk may not get in the media, you know. i also really loved [spoiler] the way you portrayed bear's schizophrenia in a way that doesn't make him look "crazy" as the media seems to portray people who have to live with that. overall, an amazing story; 10/10 stars :]

i might add a conversation regarding his size to a prequel vn/comic zine! bear (as of the visual novel) is pretty comfortable and rather confident in his body, but during his college years, he was most definitely not as confident as he is now!

bigbear427 is hunter t. by the way! if he comments, give him some praise as well!

I loved playing it a lot, saw this in tiktok and I don't regret it! though i've got a little bug, where [minor spoilers] I couldn't pick vanilla ice cream after going through the list of main flavours, it was only chocolate or strawberry, but despite this it was a great experience, can't wait to read more novels from you!

thank you for letting me know!!

This was a beautiful game i cant wait to see more !

love the game, so pretty and the characters are lovable. makes me sad but the theme of the game is translated very well 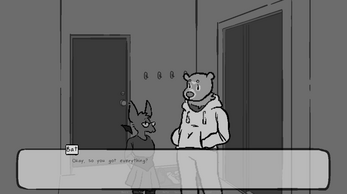 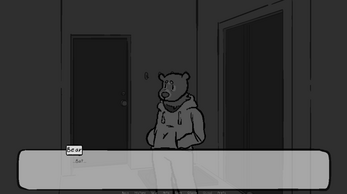 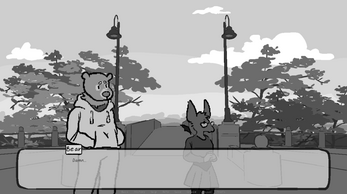